There are many reasons a person might want a fridge in their car. A car fridge can help a tailgater keep drinks and food cold while hanging out before the game. It would also be convenient for the busy mom who needs to keep drinks and snacks for the kids while on the go. These small refrigerators are good for college students who have a small dorm and not enough room for one of the larger models. A picnic or camping trip would be made much easier with a car fridge instead of the standard cooler. The following is a list of the best car fridges based on customer reviews and what each fridge has to offer. 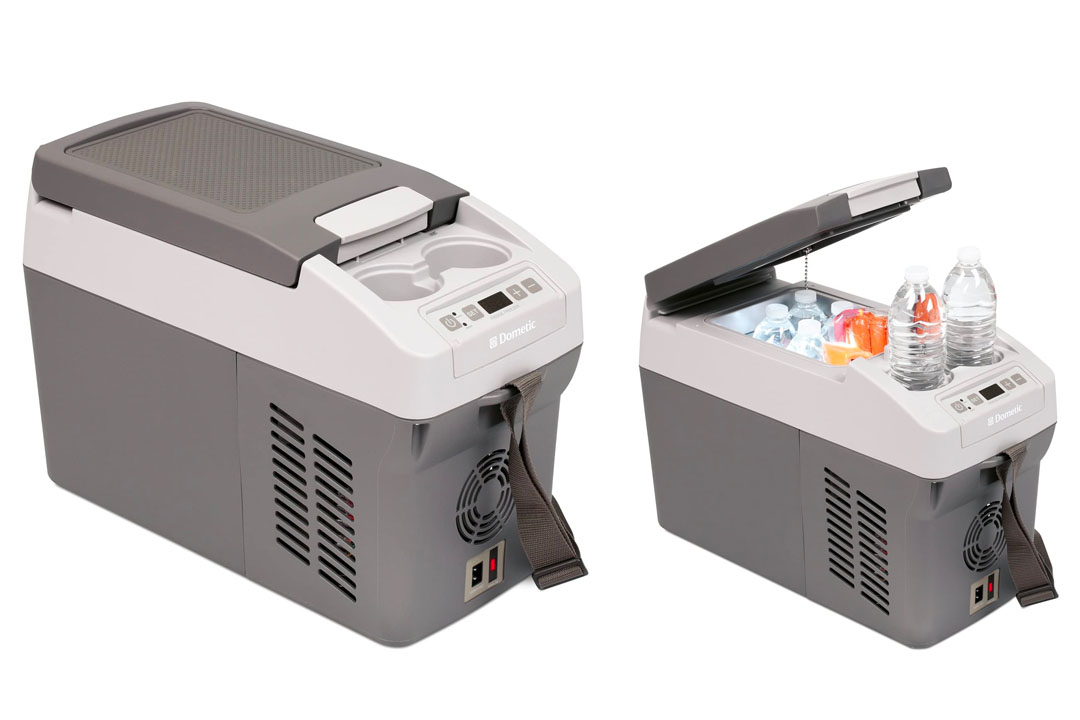 The Dometic fridge is very small and lightweight compared to other brands. The biggest benefit of the Dometic is the fact that it is run by compressor just like your household fridge. The Dometic is compact and weighs less than 20 pounds. In fact, it is the smallest portable refrigerator you can find. The temperature settings allow it to be used as a freezer if needed. It has a capacity of 10.5 liters which will allow you to put in a gallon of milk. You can get an AC adapter separately if you wish to use it somewhere other than in the car. The main drawback of the Dometic is the price. Due to it running on a compressor, it is much pricier than others on the list. 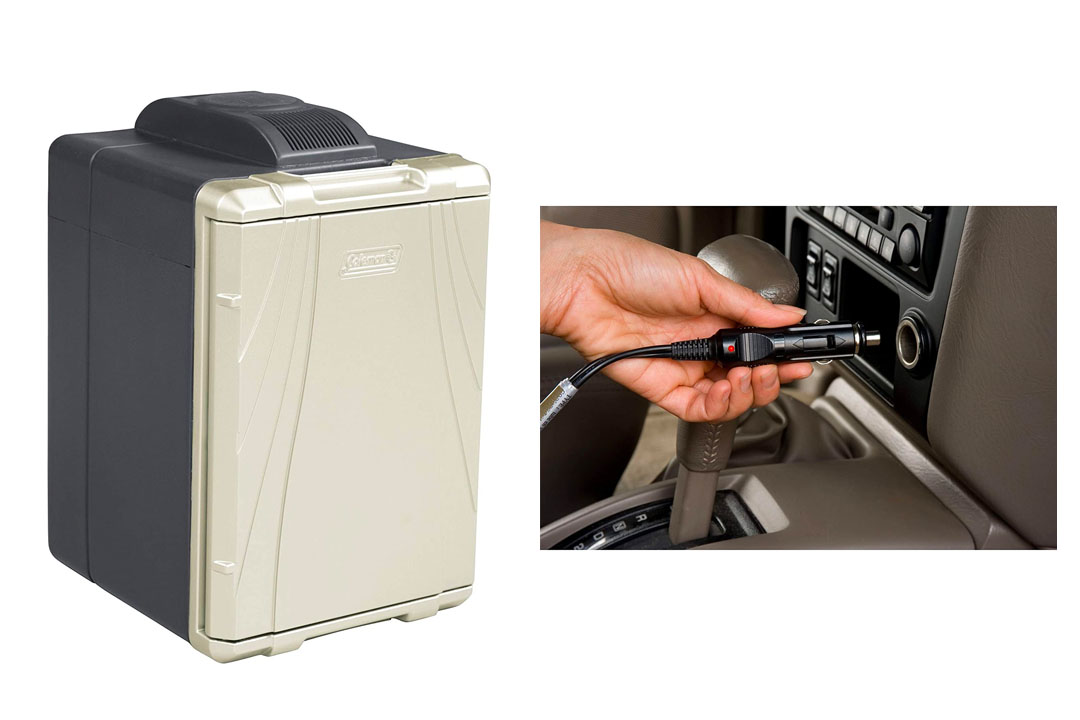 The Coleman has a 40 quart capacity meaning it can hold 40 cans plus snacks. It will chill to 40 degrees below the outside temperature. Its powered by a 12 volt outlet or a 110 V out with separate adapter. The Coleman fridge can be used like a chest cooler or upright like a mini refrigerator. It has an interior shelf tray to keep things organized. The main issue with this model is that its cooling capabilities are not as good as others. Since it can only cool to 40 degrees below outside temperature, if its 90 degrees outside then your drinks are going to be 50 degrees. 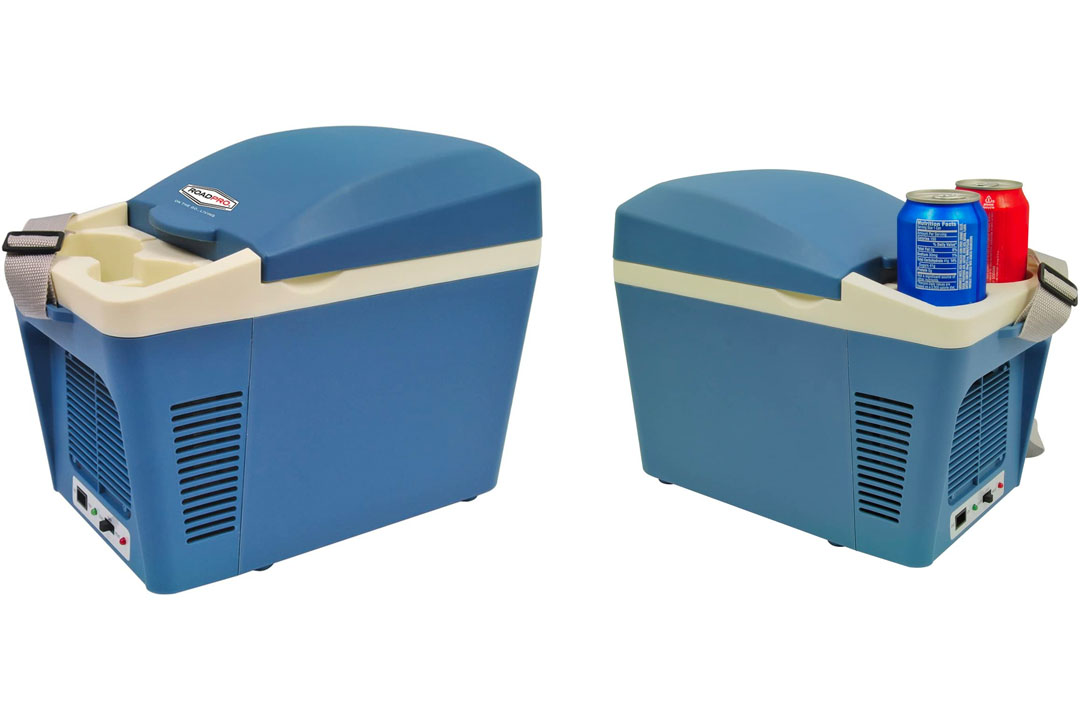 The Roadpro is thermoelectric and will cool to 20-30 degrees below the outside temperature. This model is best for someone who just wants to keep a cool drink in the car. Its small and weighs only 6 six pounds. It also offers two cup holders on the top. It can also be used for a warmer. The best thing about the Roadpro is the affordable price. It is not recommended for continuous use. 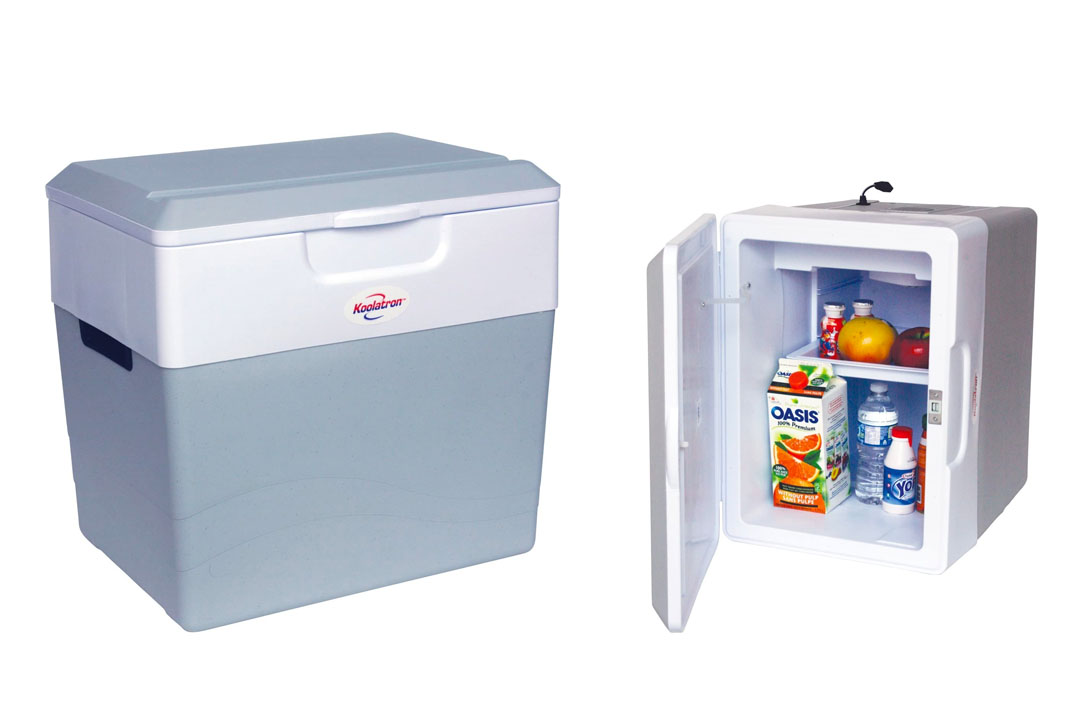 The Koolatron has one of the larger capacities of the portable fridges on the list. It can hold up to 80 12 oz cans. It also can be used as a warmer with reversal of the power cord. It is thermoelectric and can cool up to 40 degrees below the outside temperature. This means on a hot day, above around 85 degrees, this cooler may not cool to a food safe temperature. 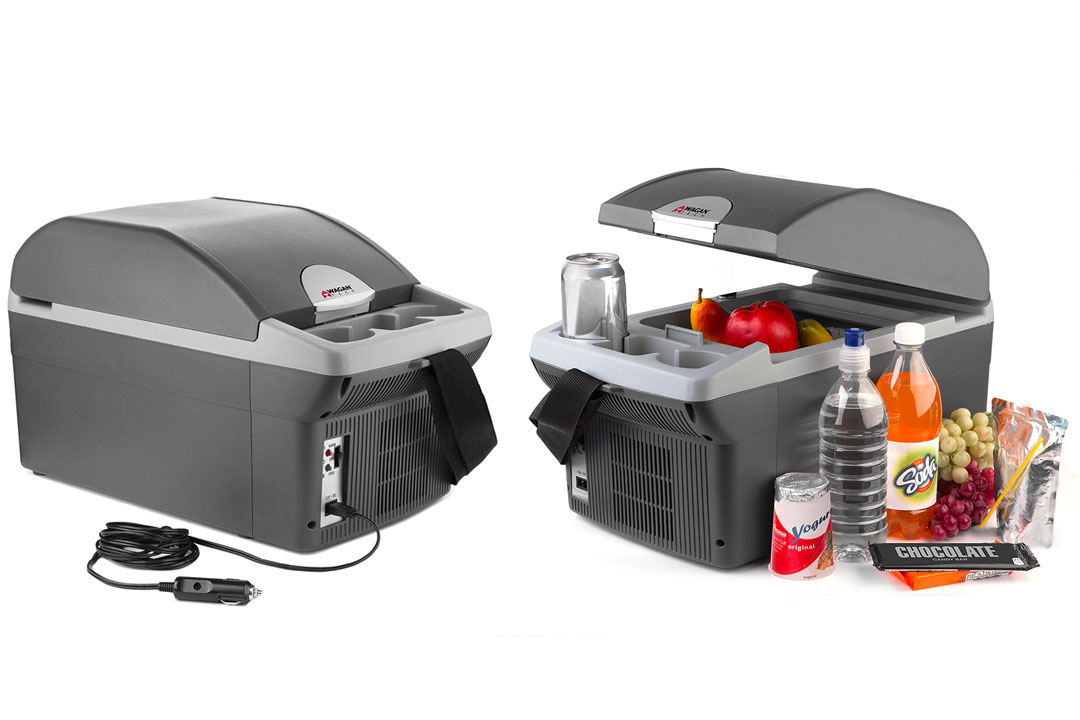 The Wagan EL6214 12V Personal Cooler/Warmer is handy when you wish to have both cooler and warmer while on the go. It has the capacity to hold up to 14 Litres or 12 soda cans. It does not require any messy ice to cool your stuff. It also has a light indicator for quickly viewing which temperature mode is in use. 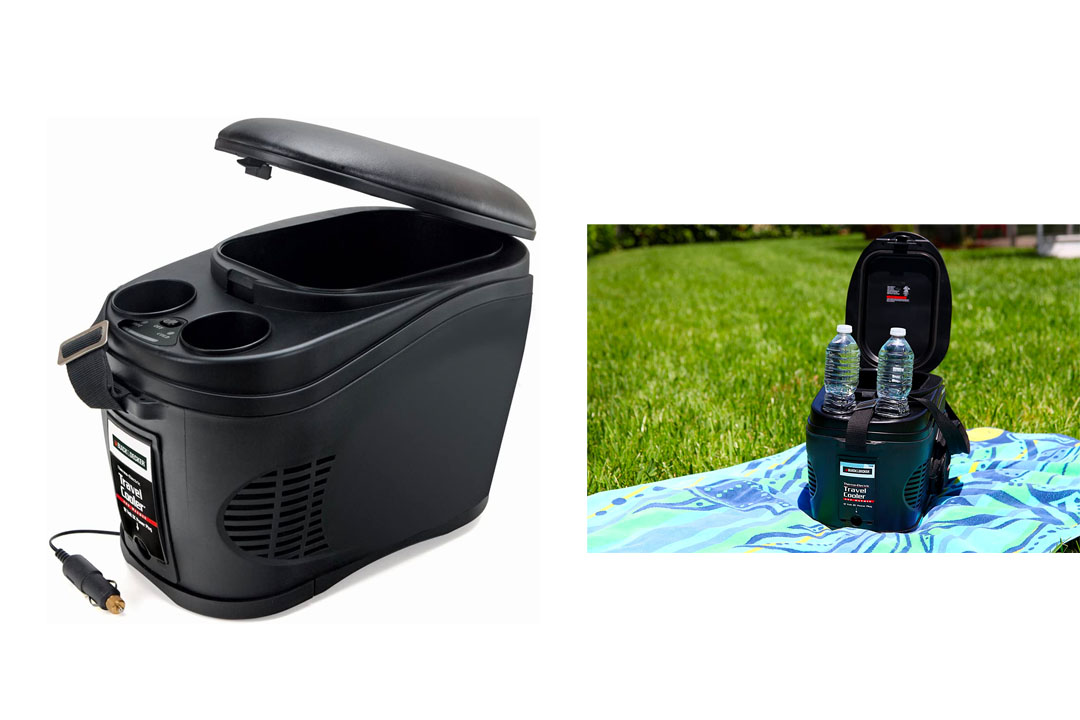 The Black and Decker model is thermoelectric and can cool up to 40 degrees below outside temperature. It can also be used as a warmer and can heat up to 120 degrees. It has dual cupholders on the top and a zippered accessory pouch on the side. It has a 12 can capacity. It offers an auto cut-off to prevent the cooler from draining the battery if left plugged in for extended periods of time. 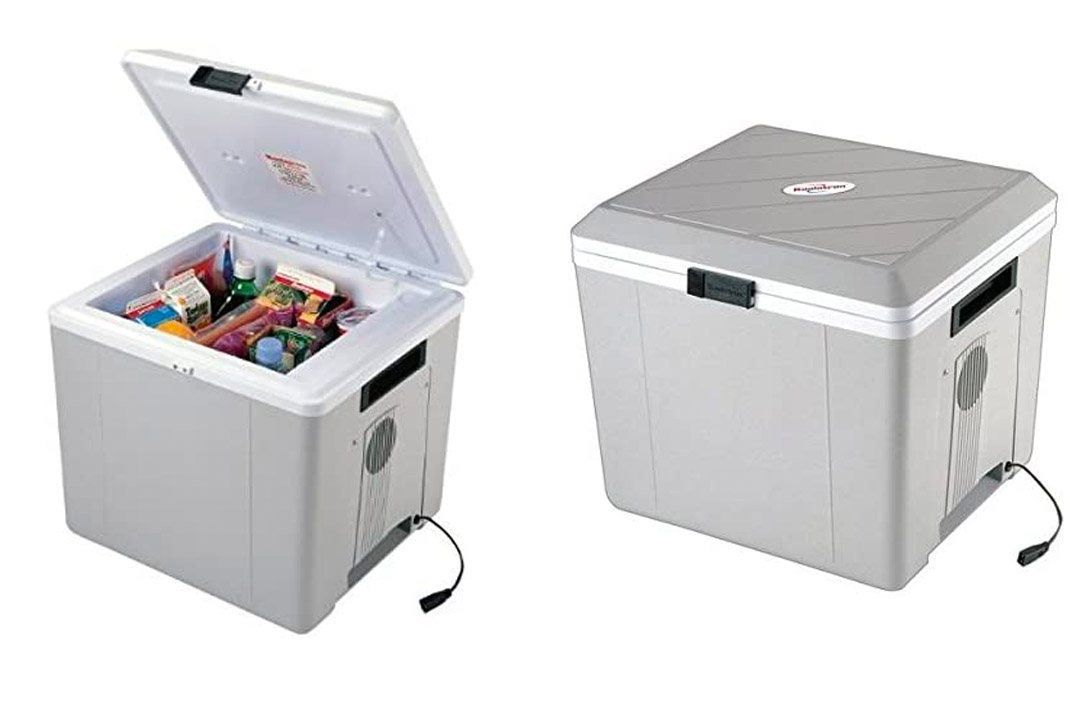 The Koolatron Voyager has a capacity of 29 quarts which is about 48 cans. It can be used like a traditional ice chest or upright like a mini fridge. Its weight is 13 pounds. The Koolatron uses thermoelectric technology to cool and has a 12 volt connector to plug into your car or boat. The Koolatron has the capability to be used long term as a dorm fridge or mini office fridge. It will cool items 40-45 degrees below the outside temperature. It is a bit larger and pricier than some of the other models on the list. 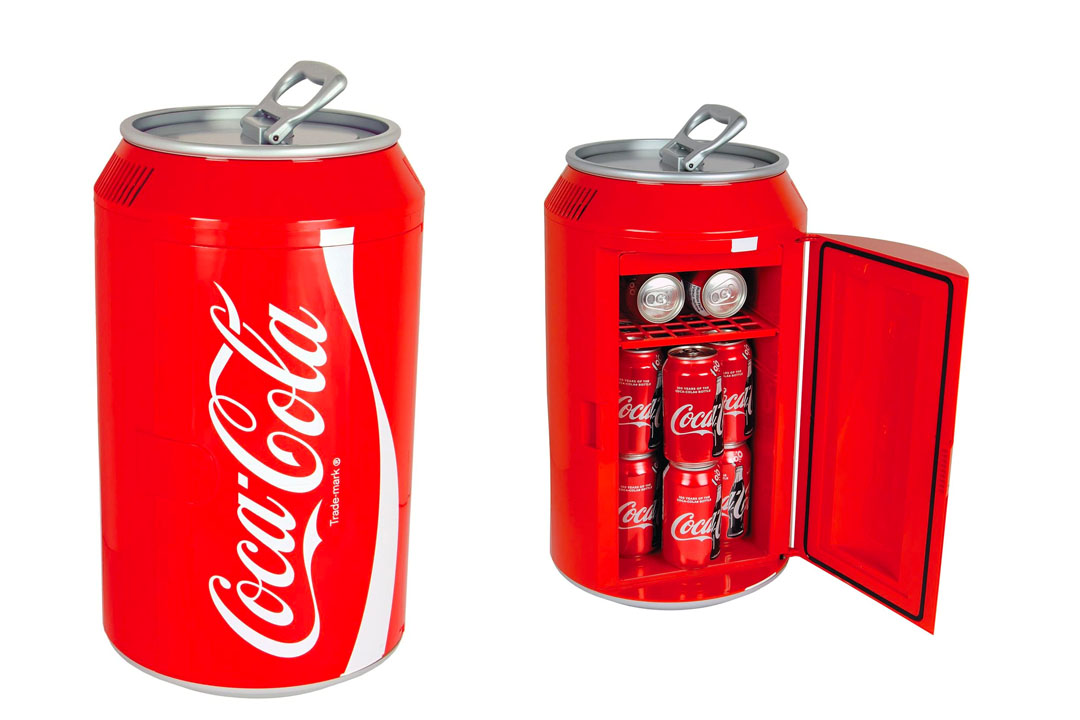 The Coca Cola CC10G 12-Can is for those who want to keep a few drinks cold in the car but wants a good looking fridge. Its attractive shape is like Coca Cola can. It has a 12 can capacity, as its name specified, and can cool up to 32 degrees below outside temperature. Its very compact, stylish and can go anywhere but it can’t offer what some of the larger units offer and has limited use. 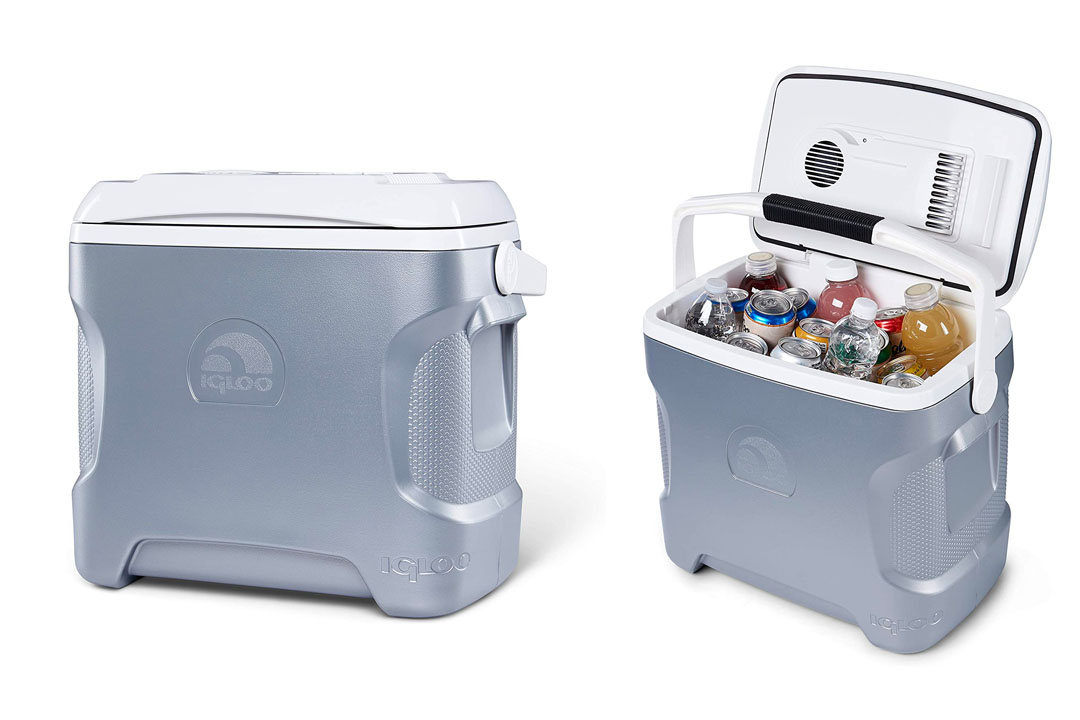 The Igloo Iceless Cooler uses thermoelectric technology to cool items to 36 degrees below outside temperature. Its sleek design and handle allow it to be portable and used for things like camping, tailgating or boating. It has a capacity of 26 quarts and is larger than some of the others on the list. It also has an optional wall adapter. 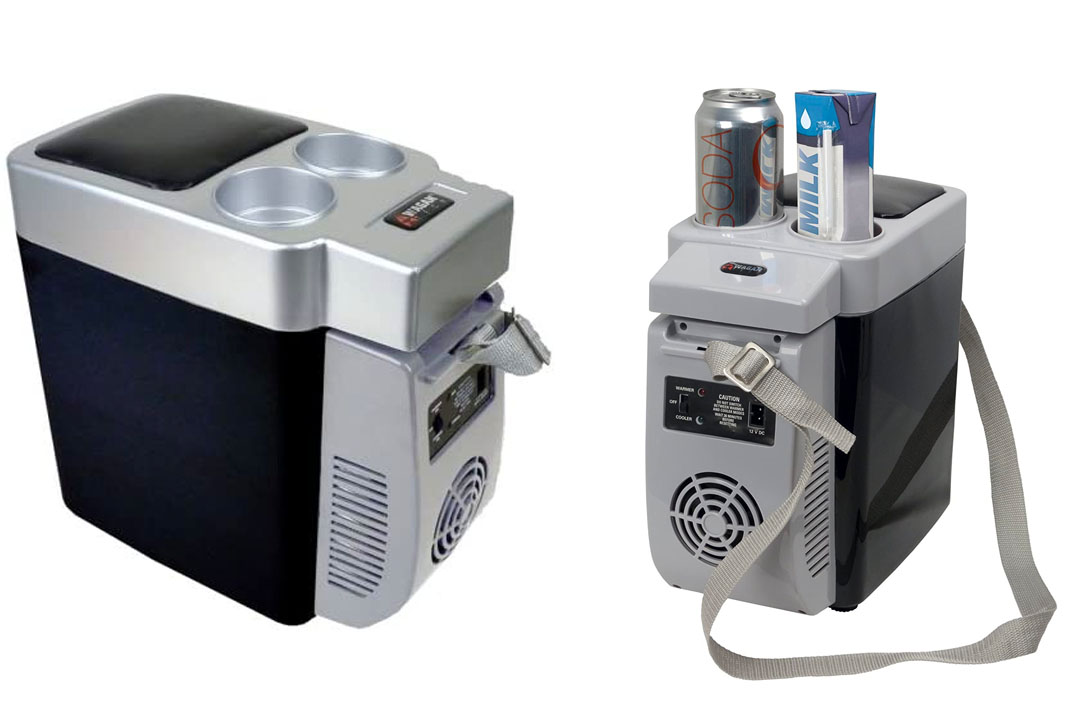 Just based on its reviews, price and capabilities the Wagan personal fridge/warmer may be the best car fridge on the market. The Wagan 2577 has the capability to cool or warm your food. It has a 7 liter capacity which means it can hold about 7 cans. It cools to about 35-40 degrees below outside temperature and heats to 140 degrees. It offers a carrying strap and has two drink holders on top. The Wagan would be a great option for a picnic or sports event since its so portable. It offers an optional AC adapter as well. The Wagan doesn’t have the capacity of some of the other units so its use would be limited.